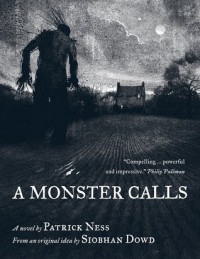 After finishing A Monster Calls by Patrick Ness, I immediately closed to the front cover and was shocked to not see a Newbery Award metal there. I don’t generally pay attention to awards, so I’m not sure what made me think of it- just that it seemed to have everything that was worth rewarding. Don’t worry though- I googled it later and found out that it did win the Carnegie and Greenaway medals for writing and illustration, although I’ll admit I’m not sure what those really stand for, but I’m just glad it won something.

Because it was amazing. Deep and thoughtful, A Monster Calls really delves into what it means to be a grieving human. Conor was a little brat, and I loved that. I loved his reaction to the monster upon first seeing it; after you’ve read the entire book, Conor’s words to the monster really put his whole situation into perspective. This is a very short read, so I definitely recommend it if you’re looking for something meaningful.

And Harry- is it horrible to say that I loved the school bully? Seriously, that kid. The book could’ve been about him and I would have enjoyed it just as well.

This book taunted emotions from me so easily: I cried at the end, I was enraged when Conor spoke with his father, I was horrified after the monster told his second story- this book spoke to me as though all of these things were happening to me. I also loved the significance of 12:07- which I didn’t understand until the end and it drew so many more things into question.

Overall, the greatest thing to be said about A Monster Calls was the writing style. Anyone can make a plot, a story, characters, but there’s just something about the way Patrick Ness goes about it. His writing style is simple and fluid and leaves nothing to be desired. It keeps me hooked on the page and thinking about being hooked on the page when I’m away. I’m almost infuriated that someone I’ve never met has such access to my emotions, as though I were just a puppet to react as the book demands and the book is made of marionette strings. It’s horrible. I love it.
Tweet