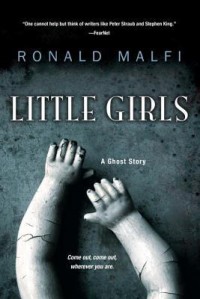 I received this title from NetGalley in exchange for an honest review.

I lifted this book off of The Book Dame -who loved it- and it became my first ever adult ghost story. I anticipated Little Girls with an edgy curiosity, expecting to be scared or at least a little creeped-out, but although there were plenty of gritty scenes that made me uncomfortable, nothing had scared me like I thought it would.

Laurie, the main character of the story was portrayed very well. In fact, you got a good idea of who everyone in the family was. I was impressed by how the light tone of Ted and Susan didn’t subtract from the dark tone of the book. Reading Little Girls, more often than not my mood could be described as “numb.” Even in the scenes dictated by Ted’s lighthearted banter with his daughter, I felt Laurie’s perspective of an outsider looking onto something that hardly fit in with her life. Her relationship with Susan was not really that of a mother and daughter that loved each other, but more of a stepmother who feels like an intrusion upon a daughter and her father. This I enjoyed, if not with a little sadness.

Another remarkable thing in Little Girls was the imagery. I had very clear views of what was going on inside the novel, particularly during the darker scenes: peeking through a tall wooden fence, shadows passing under doorways, and especially the last scene with Abigail, which I won’t reveal due to spoilers. Let me just say that it was very well written in a way that it was easy to picture. You know how sometimes you read the sentence (for the millionth time) “I let out a breath I didn’t know I was holding” and your mind just kind of skips over it and doesn’t really picture it? Yea, none of that in Little Girls. Every scene was vivid and well written.

It may have been a well written book with good characters, but I often found the plot lackluster. There were a lot of over-described actions and when I look back on the events I realize that nothing remarkable really happened until the end. There were some key points, but the beginning and middle of Little Girls seemed like completely different books from the end. Had the whole book had the plot of the end with the high points of the beginning and middle, I definitely would have liked little girls more.

Overall, Little Girls had a lot of strong standpoints, but I just don’t think it was my thing. It is my first horror story and I was expecting a little more creepiness, (although there was one scene where I got the level of thrills I desired, at the end with Abigail, but it was only one scene) but if you think this may be your cup of tea, check out The Book Dame‘s review for some more insight.
Tweet